What is the one thing that criminal is looking for? Opportunity. They don’t want to get tangled up in a messy show of their ignorance so they look for the easy targets. 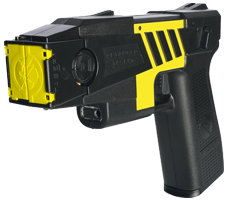 A store manager in Chantilly, VA was that easy target in the very nature of business alone: check cashing, lottery, money order and wire services. Money is motivation for a robbery and that’s just what three men took advantage of.

The mastermind behind the crime convinced his online girlfriend to purchase a Taser with her credit card and have it shipped to her address. She in turn shipped it to this brilliant man who thought it couldn’t be traced that way, ha!

So the three stooges plan to knock off the Prime Mart and make off with as much cash as they could carry. The mastermind stayed back, but in contact with dumb and dumber by telephone. They run into the store, tie up the store manager who was alone and demand money. When the manager hesitated he got a nice wake-up call from 50,000 volts of electricity emitted by the Advanced Taser M18, now know as the M26. He was shocked 2 more times until he gave up over $30,000.

Now, before dumb and dumber stunned the manager they had to call their mastermind and ask how to use the Taser…ha. Don’t you know if I were running an establishment moving that kind of money, I would already have my Taser out and unleashed on both of these clowns.

Whether you own a business or not, you need to be protected. You can check out Taser selection and other self defense products at our web site FairXchangeSafetyProducts.com